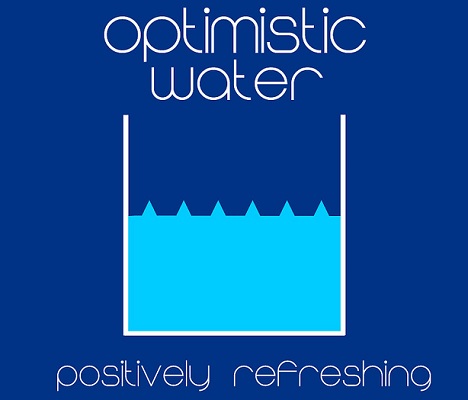 There once was a boy who was optimistic about everything. Even when things did not go well, he noticed only the good and the potential for better. As he grew older, his parents became concerned this was not healthy and began to discourage this way of thinking, yet nothing worked.

On his birthday, they decided to take drastic action. When the boy returned from school, he opened his bedroom door and saw all of his things were gone, and his room was now filled with manure, three feet deep. His parents heard the door close, and waited. 15 minutes later, they could take it no longer and rushed to the door. Inside, their son was laughing, digging, throwing manure, and having the time of his life. His parents cried, “Son, what are you doing?!” With delight, the boy shouted, “Look at all of this manure! There has to be a pony in here somewhere!”

Many people do not think half-empty or half-full. They are excited just to be in the room, sharing ideas. Having a glass, let alone water in it, is a bonus.

We need people in our organizations and in our world, who do not focus on failure, shame, blame, disappointment, and other mindsets which rarely serve us well. They provide us with new ideas, perspective, and balance.

Research tells us they also tend to have better attention, accuracy, creativity, performance, productivity, health, attendance, and relationships. And, they often make coming into work and our daily lives more enjoyable.

How do we invite this way of thinking?

Let people get excited. Optimism with persistence can accomplish anything.

Recognize positivity. When it has made an impact, prove it is noticed and valued.

Give it some time. Trust is earned by welcoming, valuing, and rewarding positivity.

Soft sell the idea. When your team believes, they will communicate the message.

Enjoy positivity. The more you accept and appreciate it, the greater its potential.

If you need one more incentive, consider this simple, powerful idea: everything of immense value we have ever created, began with the belief it was possible.